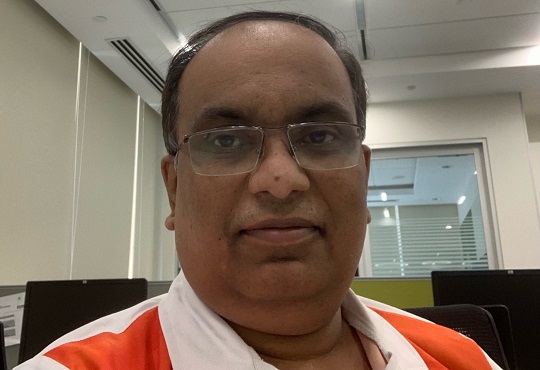 Prakash Kumar, Head of IT, BMW India, in an interaction with Sudhakar Singh, Editor, CIOReviewIndia, shares his thoughts on how the automotive industry is evolving from a technology implementation standpoint, the challenges involved, and how they can be addressed.

In terms of new technology adoption, how do you see the current automotive industry and what are the major factors driving the implementation of disruptive technologies?

Automotive industry is actually going through a very big change. What has not been seen in the last 100 years is happening now. Especially, in the last couple of years, we have witnessed several changes because of the digital interventions. One is of course, the electric mobility which is going to bring a lot of changes. And the second thing which is bringing a lot of changes is digital intervention. A car per se is no longer just an IC engine; it is becoming more and more electric and the number of components is going to go down drastically. So, it will not be a very specialized technology, it could become a commodity. The services and the features which will be bought by the car companies will actually differentiate them from the competitors and that is where big opportunities will emerge which will bring more and more digital instruments.

What do you think is the most prominent challenge that the pandemic has thrown up for the automotive CIOs?

One of the biggest challenges is on the customer front. Traditionally, automotive industry has been running through the dealers. But in the new scenario, especially post Covid-19, customers increasingly prefer the service to be more virtual. That's where a pretty big change is happening. Officially there are 300 to 400 different touch points from where the customer is coming in. All these touch points need to be integrated such that it becomes more virtual. So, departing from a physical experience of sale and service, the online mode is now being preferred.

With the industry becoming more and more competitive, companies are relying highly on the data. So, they are trying to capture all structured and unstructured data around the customer. Earlier they were only capturing the data which perhaps was around the car, but now the scope has widened to capturing the consumer behavior. 360 degree view of the customer interactions are being tracked and the data is being used for starting from the finding out whether a particular lead is likely to mature or not, or what is the propensity of that particular deal to handling a customer in this lifecycle. For example, if customers are reaching out to the company, they're trying to map that particular customer based on that data. So, the data points are being captured and used for understanding customers better and creating better products. That's a big shift which is happening today.

Speaking of making use of data, how do you see this being leveraged on the shop floor and in the supply chain? How are automotive manufacturers making use of the data in these two areas?

Data is being used aggressively for predictive modeling and preventive maintenance. The idea is to keep all the networks interconnected. We should be able to track the movements, so that we can optimize the inventories. It is all about how we can optimize the inventories by leveraging insights from the supply chain. So, these are the areas where a lot of technology is being used in terms of tracking, monitoring, getting the data and planning the distribution. Automotive manufacturing is a sector where actual manufacturing is done by multiple suppliers who supply different components. So, it is very imperative that the complete supply chain is very well integrated with the final manufacturing. This can cause considerable reduction of cost.

For example, in our case, we have a lot of shipments which are coming from across the country and from the different continents. Hence, it becomes very important to track the movement of all those components; only then we will be able to commit that how and when a particular type of configuration would be delivered.

When we look at the integration of business functions in automotive sector, where do you see the maximum friction happening? What can be done about it?

With the traditional setup of waterfall model in which the IT projects used to be handled, even after months of work, the output used to fail to meet the requirement. Secondly, the business was also not really IT savvy and the workflow comprised disparate silos with lack of integration. As a result, the whole thing had to be done all over again. And that's where the conflict was.

Today, DevOps is bringing about a change and the process is becoming integrated. At BMW India, instead of calling something a project, we call it a product, and enable the shift from project to product. For example, the online sale becomes a product and we run this product in a sprint manner. So it's a two week or a four week kind of a sprint, and every day the business team works closely on it. And that's how project management is being done. Earlier, the conflict was that the business was talking on a different dimension, and it was working in a different area. And now the new thing which is happening in the business is that everyone is coming together and co-creating the solution. The collaboration level is increasing throughout enterprises.

How do you envision the automotive sector’s evolution in the near future and how should the players gear up for the emerging challenges?

Electric mobility is going to change a lot of things. The number of components will drastically reduce and the life cycle of a car will become longer. The focus will be on what digital offerings the car has. So, from an IC engine car, it will become a digitally enabled car. And autonomous cars are also coming which means it will be driverless car, however, it might take some time to come in India. But for the developed countries, I think it will be sooner than later. So, this is going to make a lot of change. In automotive sector, it is not just going to be about engineering, but also IT enablement. And that's going to become the center of the whole process. That is where the maximum innovation would be sprouting in next five to 10 years, which will change the whole dynamics of automotive industry.

IT services
The Diameter Signaling Controller Old Wine in a New Bottle?